It takes thousands of years for Light to travel from Sun's core to the surface!

The Sun is a yellow dwarf star, a hot ball of glowing gases at the heart of our solar system. Its gravity holds the solar system together, keeping everything – from the biggest planets to the smallest particles of debris – in its orbit.
The connection and interactions between the Sun and Earth drive the seasons, ocean currents, weather, climate, radiation belts, auroras, life and what not !
The Sun outshines the sky during the daytime. Its light scatters in all possible directions.

Sunlight takes only about 8 minutes and 20 seconds to reach the Earth.
But do you know that this light generated at the core of the Sun, can take up to thousands of years to reach the Sun's surface?
Unbelievable but true !
This short blog explains why it takes such a long time for light to travel from the core and reach the surface.

Have you seen a heavily drunk person walking across the streets?
To take only 'x' steps in straight line, the drunk makes random left and right turns, and ultimately end up taking on an average - x2 steps !
For the sun, we know how far we want to go to get out, because Sun's diameter is 696,000 kilometers.

First, let's consider how the Sun's interior is-
Sun is high density mixture of Helium, Protons, Electrons and other atomic particles. At core, the energy is released in the form of Gamma Rays. 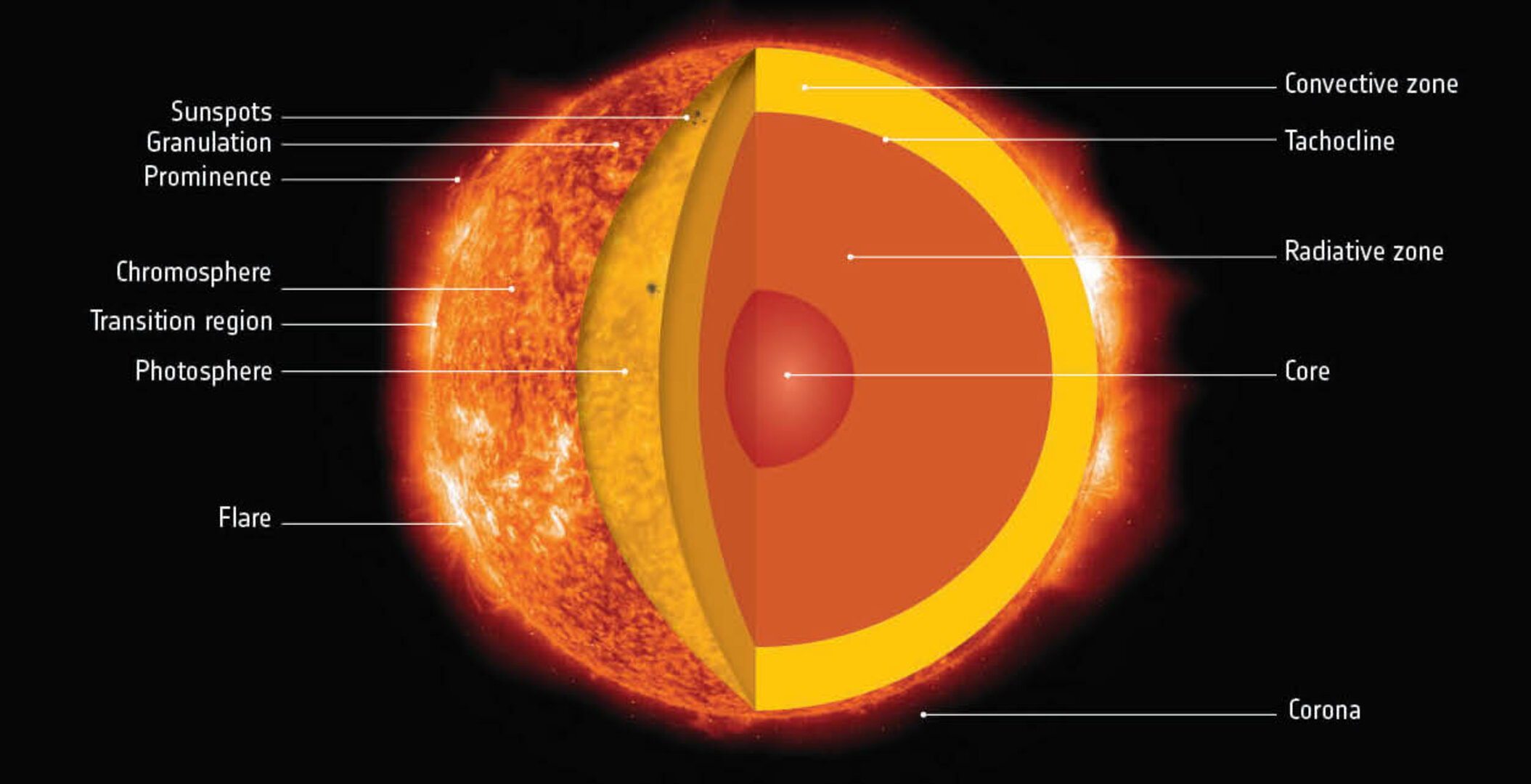 At the core, protons and helium nuclei are so thick that an emitted gamma ray can't get very far before it is absorbed.
If you imagine that a gamma ray is emitted right at the center of the sun then it will start out heading right for the surface. But when it crashes into a proton, the result of the collision is a proton with extra energy. The proton gives up that extra energy by emitting another gamma ray photon.
But this one could head in any direction -- even right back where it started from. And so it goes on !
The gamma ray heading from one collision to another, changing its direction each time it is absorbed and re-emitted.

Calculations
Now we just need to know how far a photon travels between emission and absorption, and how long this step takes. This requires a bit of physics!
Based on some complex calculations, which involve Sun's density, proton size and distance between a proton and an electron, we can safely assume that - the actual 'mean free path' or 'a step' of  a photon closer to 1 centimeter.
What we have is -
1) 'a step' of  a photon = 1 centimeter
2) Light travels at the speed of 3 X 1011 cm/sec. Therefore light travels this distance of 1 cm in about 3 x 10-11 seconds.
3) Very approximately, a photon will have to take (696,000 kilometers/1 centimeter)2 = 5 x 1021 steps.

Some references mention to 'hundreds of thousands of years' or even 'several million years' depending on what is assumed for the mean free path or a step.
Also, the interior of the sun is not at constant density. There are different zones inside. So that the steps taken in the outer half of the sun are much larger(longer) than in the deep interior where the densities are highest.

Most astronomers are not too interested in this number because it does not impact any phenomena we measure with the exception of the properties of the core region right now.

The point of all this is that it takes a LONG time for light to leave the sun's interior!!

No Comments posted yet...